Leonardo Da Vinci’s “Last Supper” seems to be part of a mysterious encoded riddle relating to the pyramids.

The ancient pyramid cultures all built these Triptych (Three-Door) Temples. Does this mean they shared the same religion?

Like the pyramids, the presence of these Triptych Temples worldwide throws enormous weight behind the “Atlantis” theory—the idea that civilization has much older roots than presently accepted by science; that there is a major forgotten episode in human history; that an advanced ancient culture once flourished but was destroyed in a cataclysm; and that history’s first known cultures were inheritors of its legacy.

There are two different versions of history.

We already know the mainstream version found in history books.

But there’s another, more mysterious hidden history that’s not so widely known.

This little-known history describes the world’s first cultures as having inherited vast knowledge and ability from an older, more sophisticated but now-vanished Mother Culture, a great kingdom named Atlantis, once home to an advanced and spiritually sophisticated people.

This hidden history was proposed and maintained by Victorian-era scholars and archaeologists in the 1800s, after they discovered a series of mysterious ancient cultural parallels worldwide: 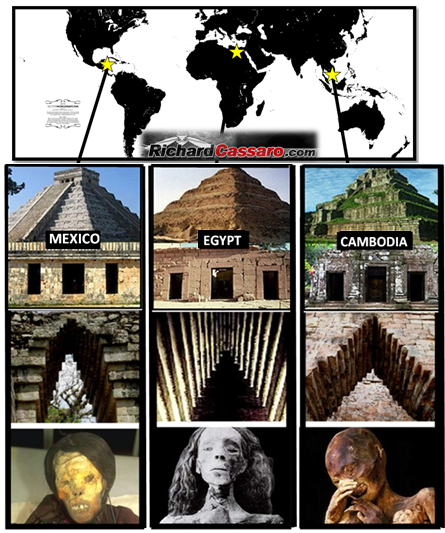 To the Victorians it seemed inconceivable that these similar societies could have evolved separately; it was more logical to think they all evolved from the same parent source—Atlantis.

The Atlantis model of history stood unchallenged for decades. But it was suddenly abandoned in the mid-20th century when a new wave of Western scholars declared that not enough evidence exists to support it.

Why and how do all these temples exhibit the same parallel architecture, as if constructed by masons sharing a similar knowledge base? Do these Triptych temples indicate a shared religion inherited from the same Mother Culture?

In fact, the Triptych is the forgotten Universal Religion of Antiquity—the legacy of the much older Lost Civilization of Atlantis

This Universal Religion of the Triptych was contained and kept alive in what modern scholars call the ancient “Mystery Schools.” Held in the highest secrecy and reverence, the teachings of the Mystery Schools were said to contain the secrets of the universe and the keys to great and magical practices.

Members of the Mystery Schools were endowed with extraordinary insight and superhuman qualities and abilities. Forefathers of modern western thought—Homer, Pythagoras, Socrates, Plato, and Aristotle—were initiates of the Mysteries, who changed history with their philosophies and advanced knowledge.

With the dawn of Christianity came a period of great change. In a quest to gain authority over the masses, the Church began to root out all traces of the wisdom of the Mystery Schools. Even Plato’s famous Academy, which flourished for over 900 years from 387 BC until 529 AD, was closed down by Emperor Justinian, who claimed the Academy was Pagan.  As a result, students of the Mystery Schools went into hiding. To safeguard the wisdom, they shrouded their ancient secrets in allegories and symbols and placed it all under the guardianship of various streams of “esoteric” societies, the members of which have included Galileo, Copernicus, Da Vinci, Kepler, Isaac Newton, and Napoleon.

The ancient knowledge waned a little more with each successive retelling, and as Christianity grew to empire status, the teachings began to die out. Ancient Triptych temples fell into ruin as did the wisdom they once preserved. It appeared that many, if not all, connections to the original source were severed or so diluted that the true Mysteries were about to become lost.

It was during this era that a powerful secret society called the Masonic Fraternity—the Freemasons—stepped onto the stage of history and began what would become their triumphant quest to keep the details of the Mystery School teachings alive, and pass the torch on to a new generation.

Commissioned by the Church to build Europe’s Gothic cathedrals, the Freemasons secretly encoded the Triptych’s wisdom into the facades of churches, castles, cathedrals, stone landmarks, reliefs, monuments, and statues, where it remains concealed today.

This partly explains why countless medieval Gothic cathedrals built by the Freemasons all share the same master blueprint—a mystifying “Cathedral Code” of sorts, which is yet to be discovered, analysed, or explained by modern scholars: 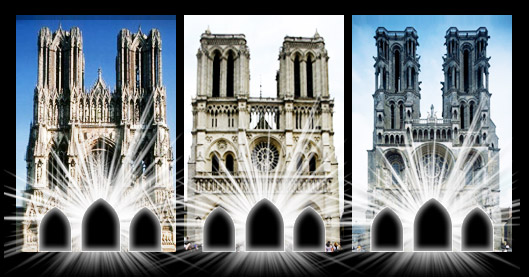 Above: Gothic cathedrals with Triptych entrances.

In fact, all the great Secret Societies (before they were taken over in modern times and co-opted for nefarious purposes, which many are being used for today) once shared the same Universal Religion of the Triptych; hence the universality of the Triptych entrance. 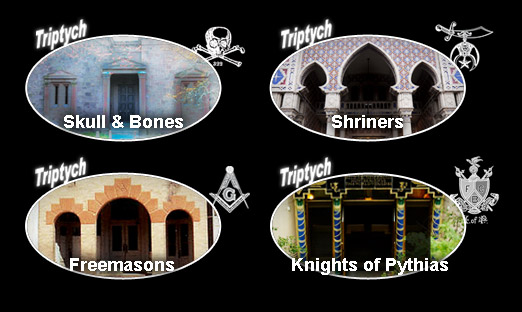 Written In Stone takes you on a journey through history’s earliest and greatest civilizations to show you the presence of the Triptych—an undocumented and mysterious ancient cultural correspondence. The book highlights how different peoples in different times and places understood and practiced the same Universal Religion / Sacred Science which they all symbolised by the same Triptych three-door entry.

It also shows how history’s operative Freemasons fully understood the ancient legacy of the Triptych, and secretly incorporated its design into the entryways of churches, castles, cathedrals and other sacred structures.

This quest for lost wisdom will carry you across the Nile in Egypt, to the ancient lands of Persia and China, into remote regions of India and Southeast Asia, high up the Andes Mountains, and deep into Mesoamerica’s thick jungles to discover and decipher ancient architecture and gain true insight into the ruins of the world’s most magnificent ancient empires.

We’ll see how the Renaissance itself was nothing short of a “rebirth” of the Universal Religion / Sacred Science in Europe, and a rediscovery of ancient Triptych wisdom: 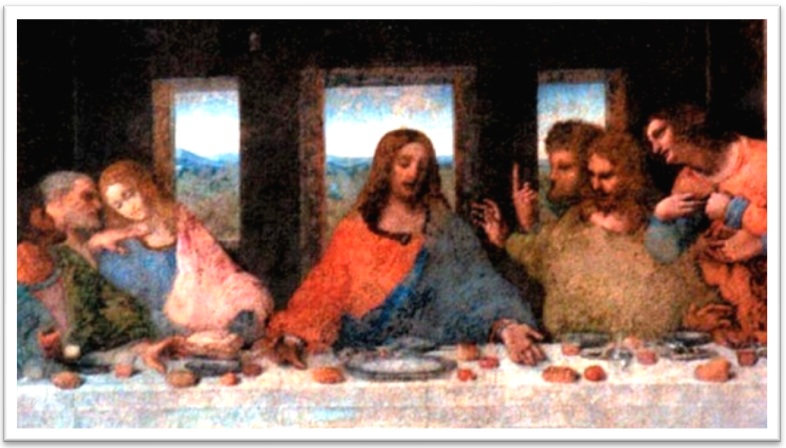 Above: The real-life “Da Vinci Code” is the ancient Triptych behind Christ! Leonardo da Vinci encoded the Triptych and its esoteric meaning in The Last Supper, a fact still not recognised by scholars

We’ll also see how the Masonic Fraternity is no longer a true repository of the Triptych / Universal Religion / Sacred Science wisdom, having lost its original purpose, but does still hold the lost wisdom in its symbolism, ceremony, and ritual.

As a result, few Freemasons and even fewer Westerners know of the existence of the Triptych / Sacred Science; it is an enlightening and empowering tradition that enables humans to excel and reach seemingly superhuman levels of accomplishment. It’s no coincidence that Freemasonry has included many famous and world-changing men, including Washington, Benjamin Franklin, Voltaire, and Mozart.

Join the Written In Stone newsletter and stay connected with videos, reports, web blogs, and updated information about the book.

Written In Stone has the makings of an intellectual revolution, but it tells us something more. As we recover the truth about prehistory, we will slowly become awakened to our own hidden potential—for its precepts are as applicable in our own lives today as they were in the lives of our ancestors thousands of years ago.